Just added to your cart 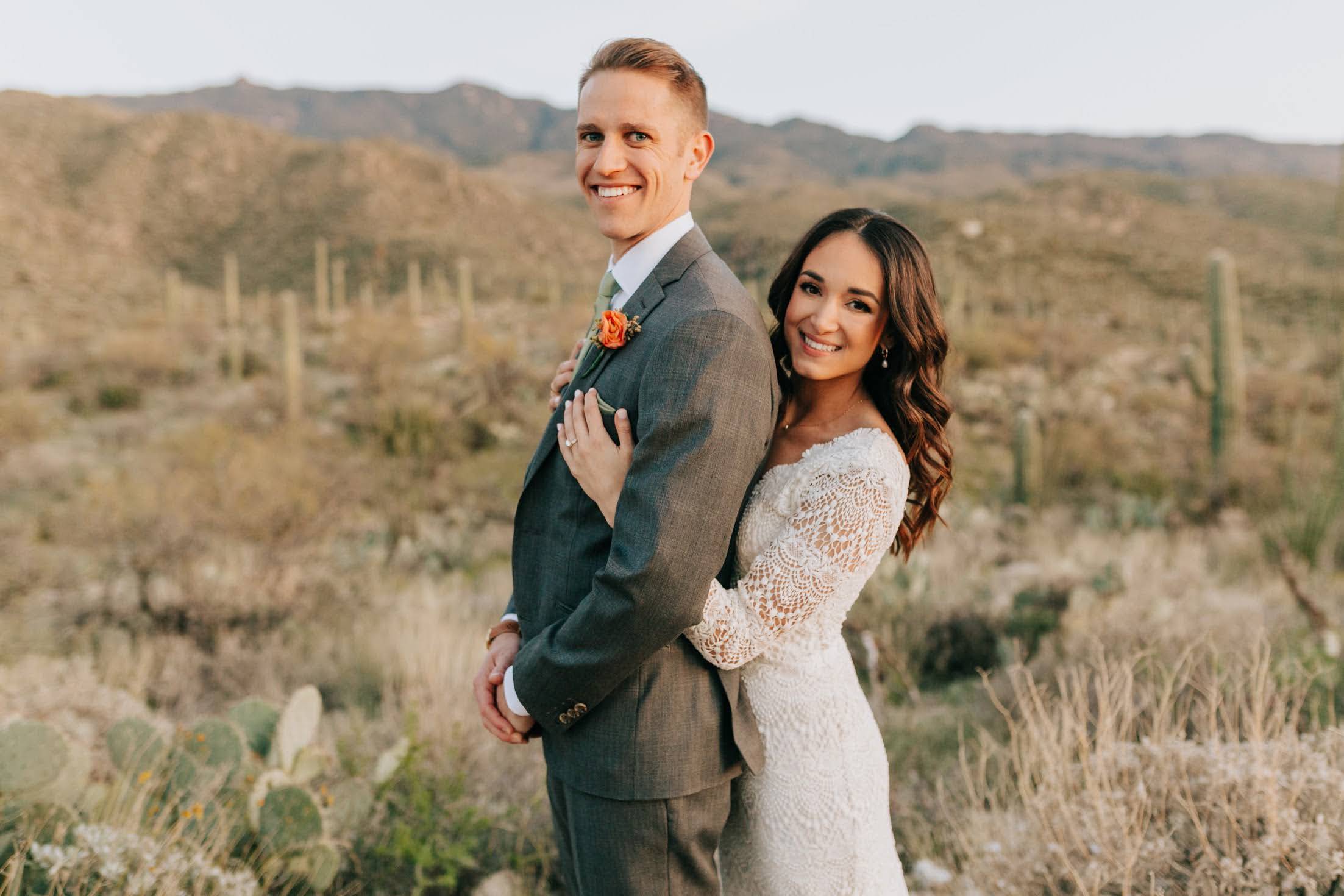 Love in the Time of COVID.

The couple originally intended to get married in Tucson, AZ, at a beautiful venue called The Barn at Tanque Verde Ranch. With over 175 guests and a large bridal party, it was heartbreaking when less than a week before the ceremony, Arizona enacted a shelter-in-place order that shut down any events with more than 10 people. They also had to cancel their honeymoon in Bali due to flight and hotel restrictions.

After a year of planning, the state mandated order created mixed emotions. As a couple not used to being the center of attention, a smaller, more intimate wedding was what they had originally wanted. Though upsetting that their best friends and some family would be unable to attend, ultimately, it was the couple’s commitment to one another that lead to the decision to proceed on a smaller scale. 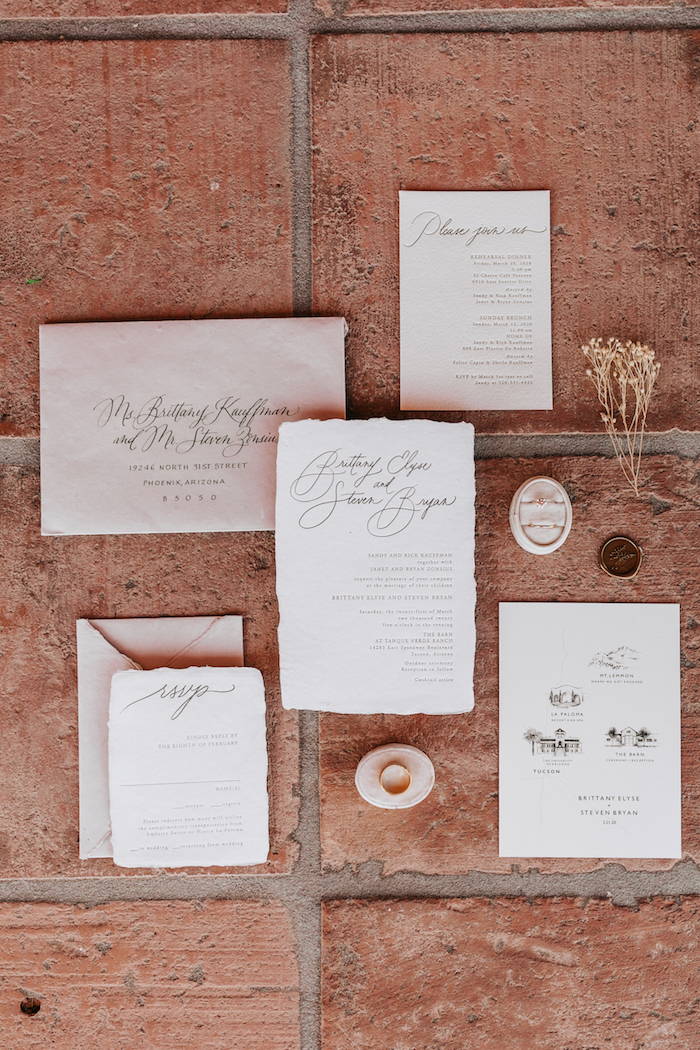 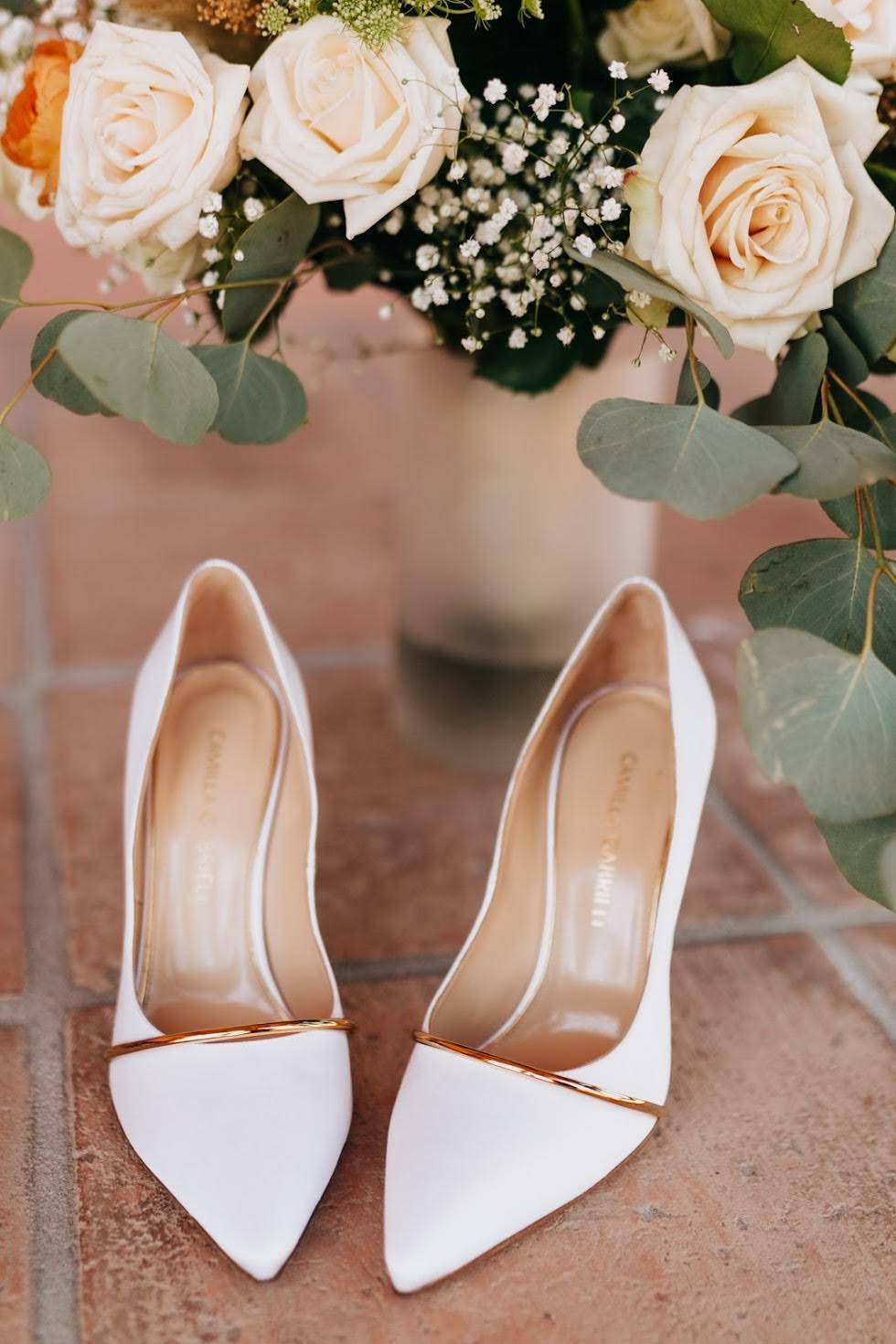 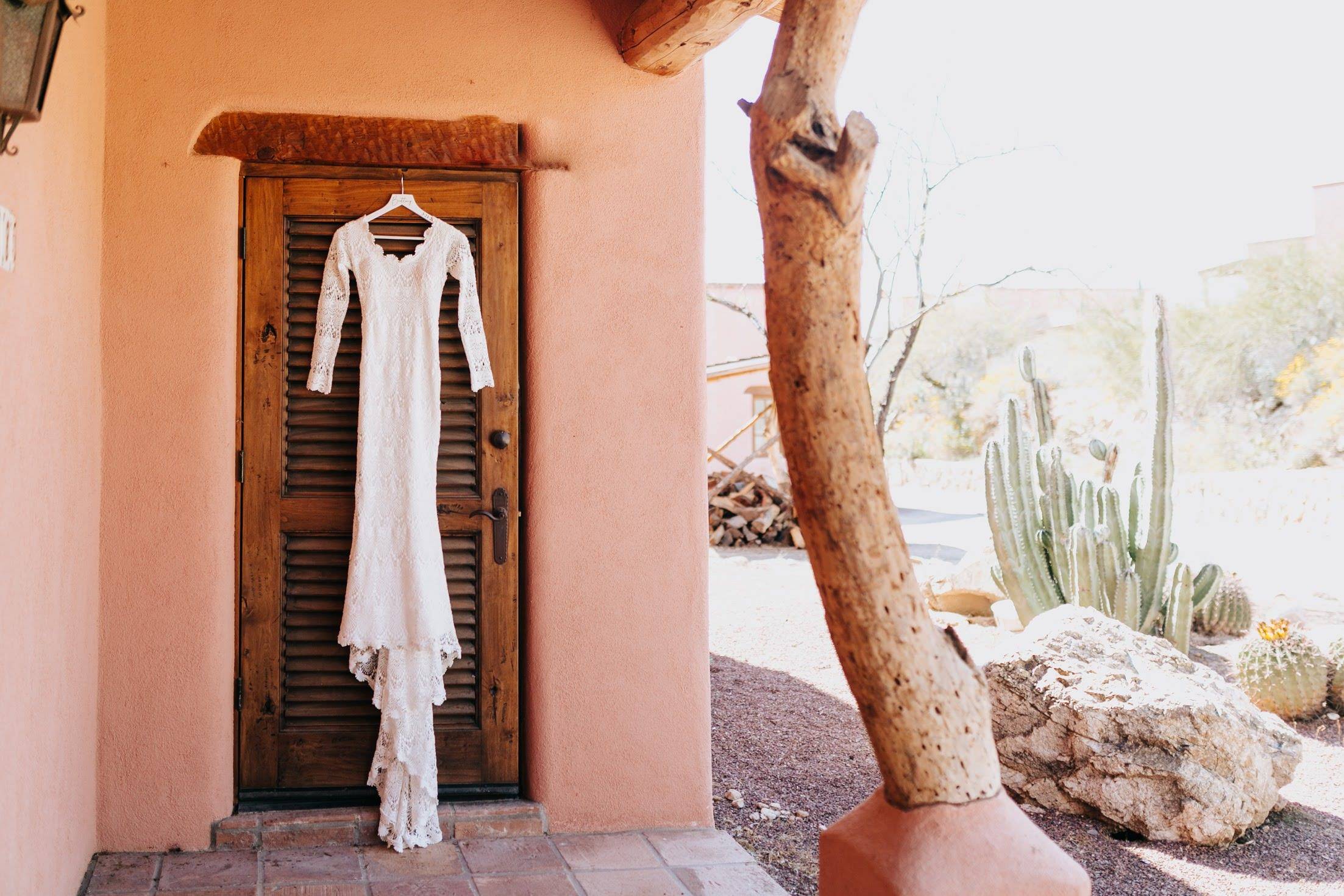 Resetting their own wedding expectations was a difficult emotional moment. Embracing the challenges, they created an intimate ceremony surrounded by their closest friends and families. 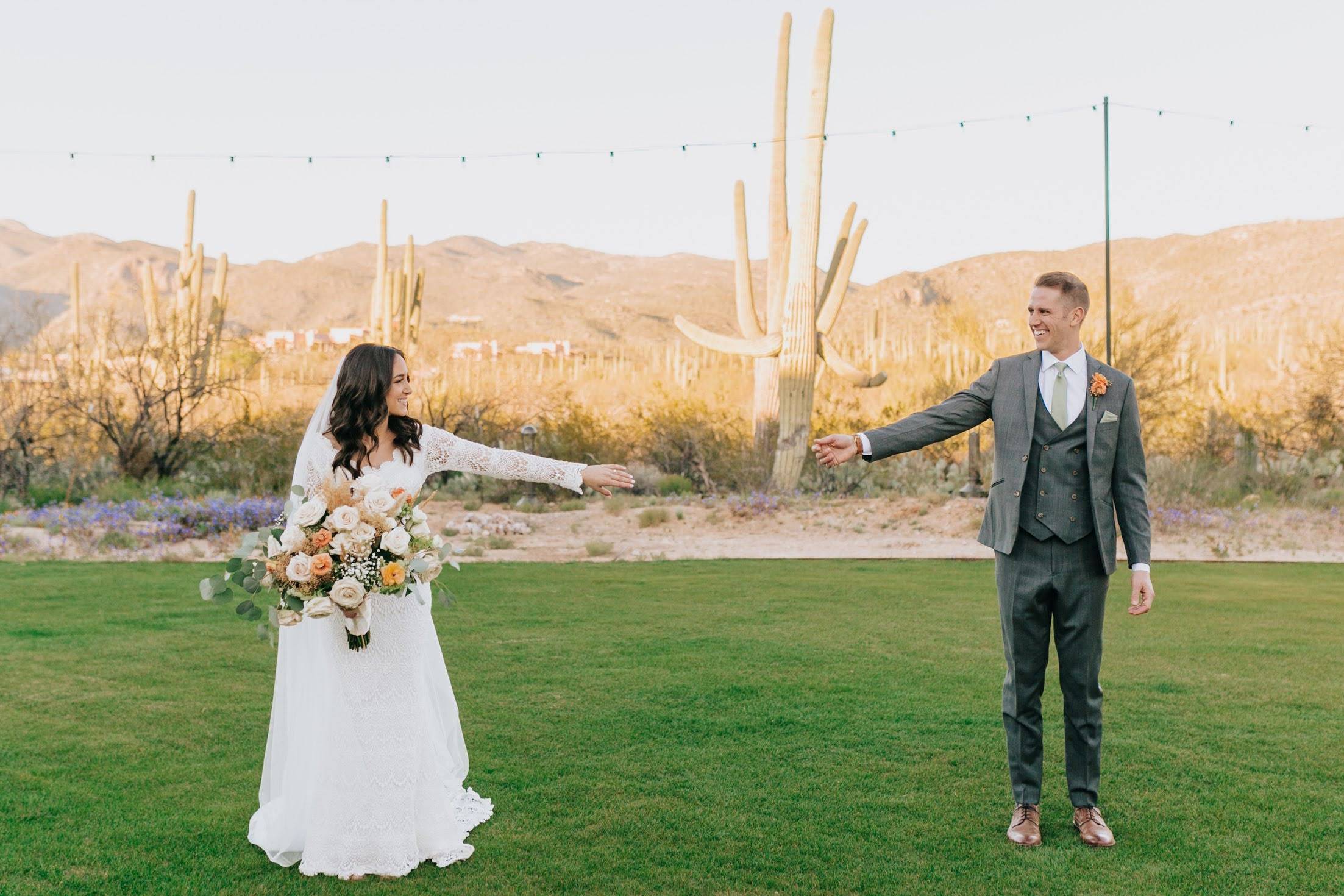 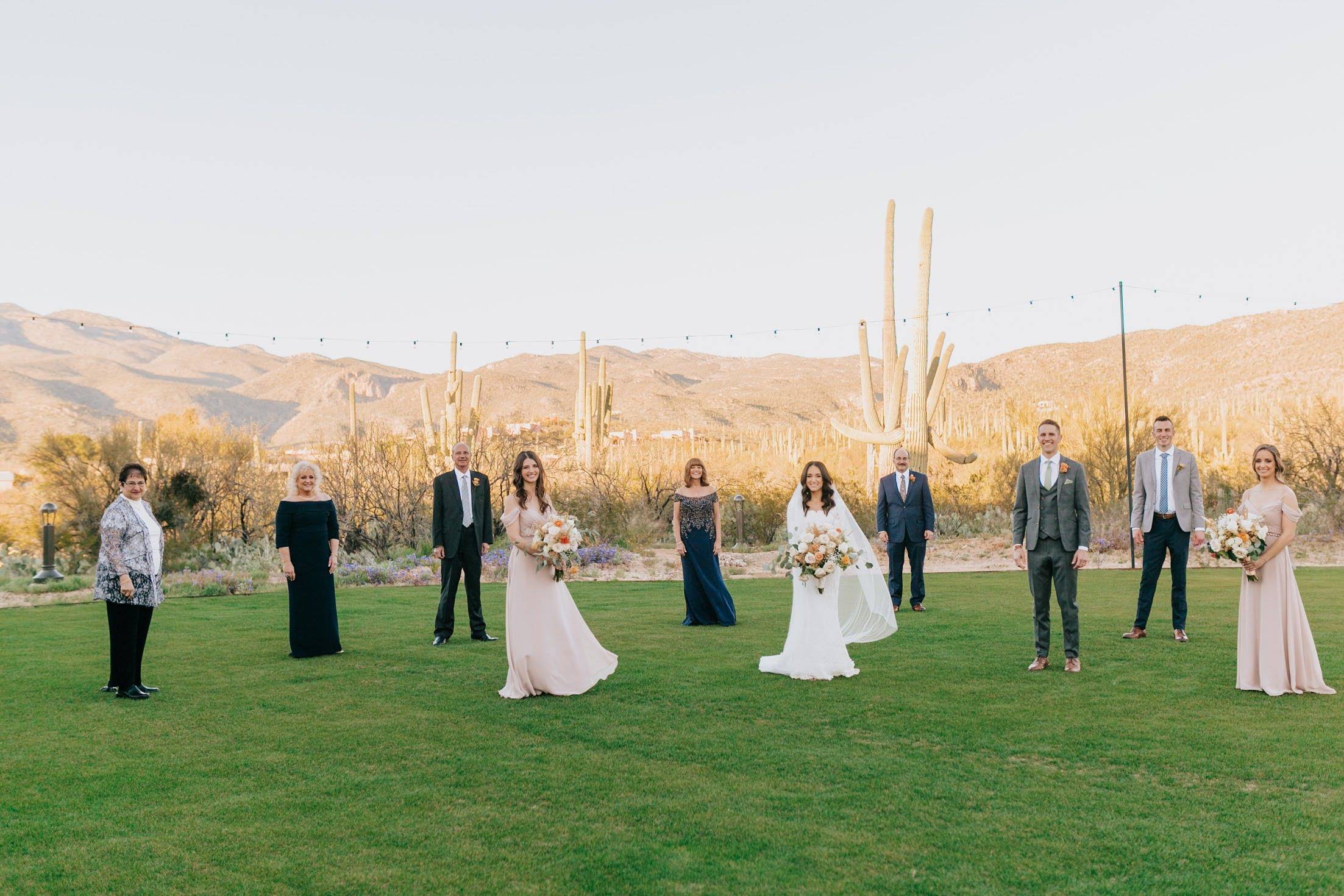 An unexpected silver lining, with less guests to interact with, they were able to be more present on their wedding day and take everything in. From truly enjoying her morning coffee, appreciating the beautiful desert scenery, to the little things in between.

Morning relaxation was replaced by a Zoom yoga class led by Brittany’s Matron of honor, a perfect way to calm the nerves and start her day.  Aside from her sister-in-law and sister who was her Maid of Honor, none of her girlfriends could physically be there. While she missed the sweet moments they would have shared, their virtual love and support made the day incredibly special. 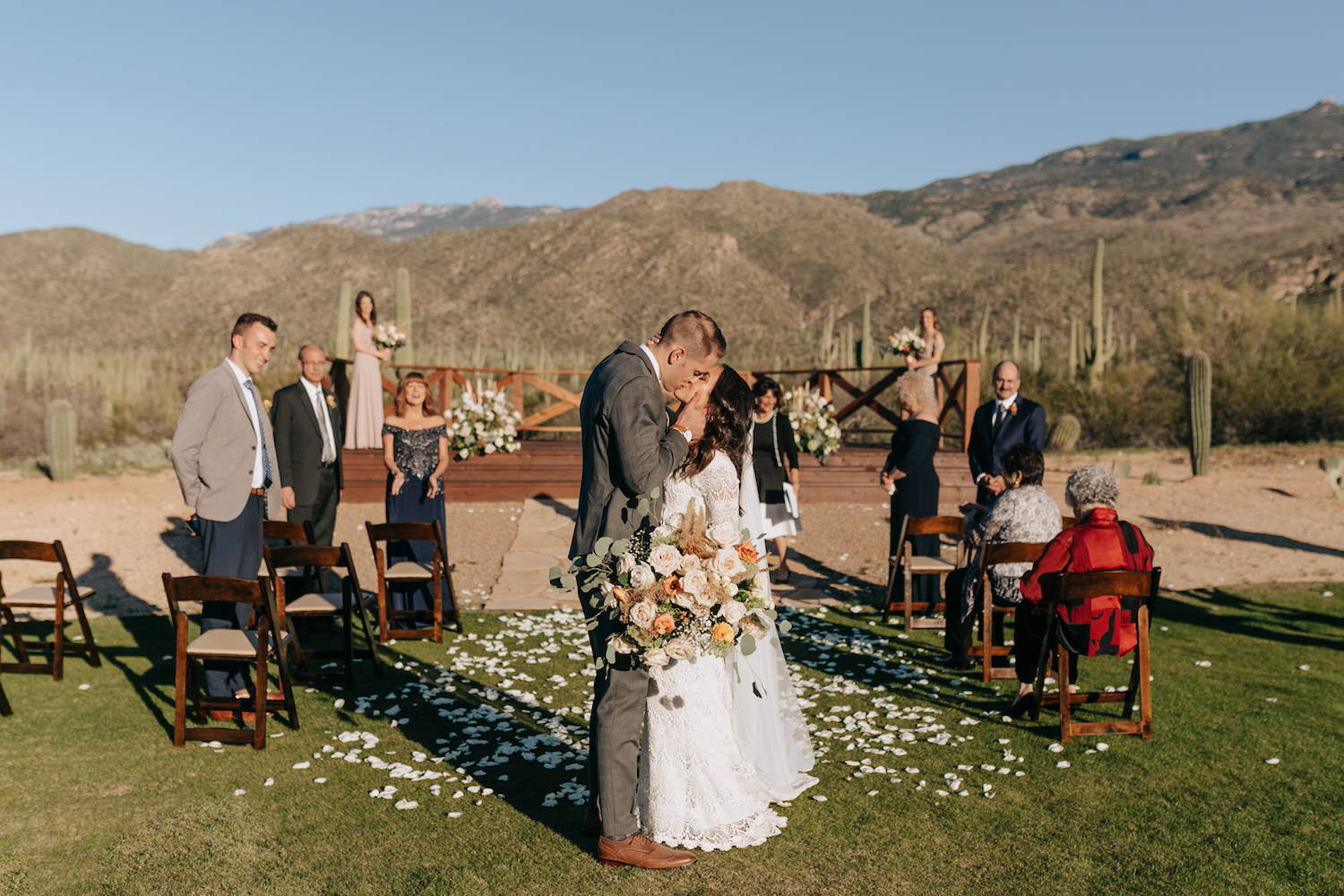 For Brittany, skipping the “first look” and seeing Steven for the first time as she walked down the aisle was so special. Having just immediate family members there made it much less nerve wracking.

Brittany’s sister-in-law reached out to the entire wedding party and closest friends just 2 or 3 days before the wedding. She had ALL of them write Brittany and Steven letters which she then printed, beautifully packaged and gifted to the couple to read that evening. Additionally, her Matron of honor made a short video and got the bridal party and closest friends together on Zoom to share the wedding ceremony. 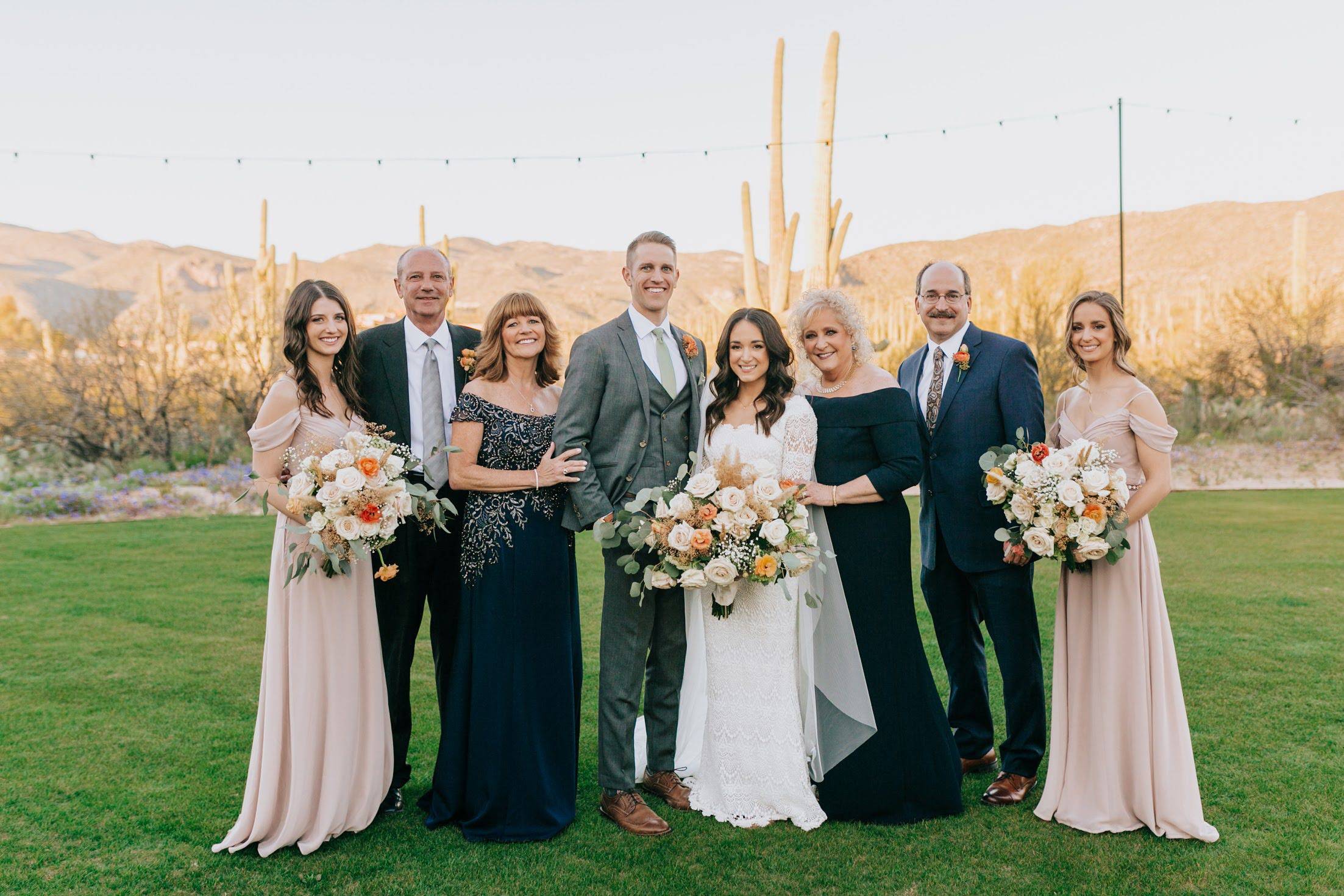 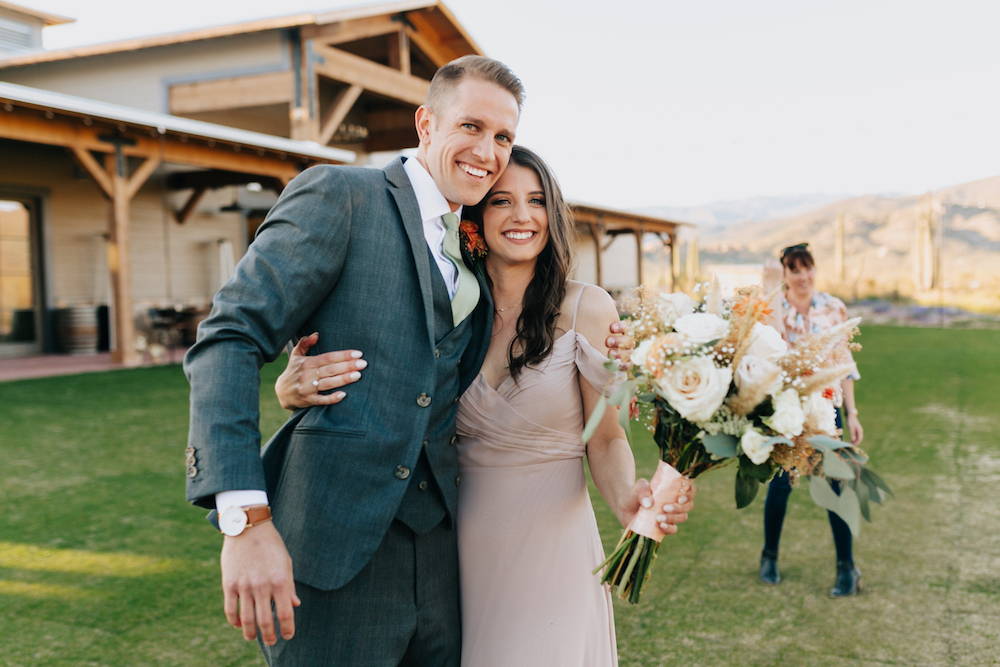 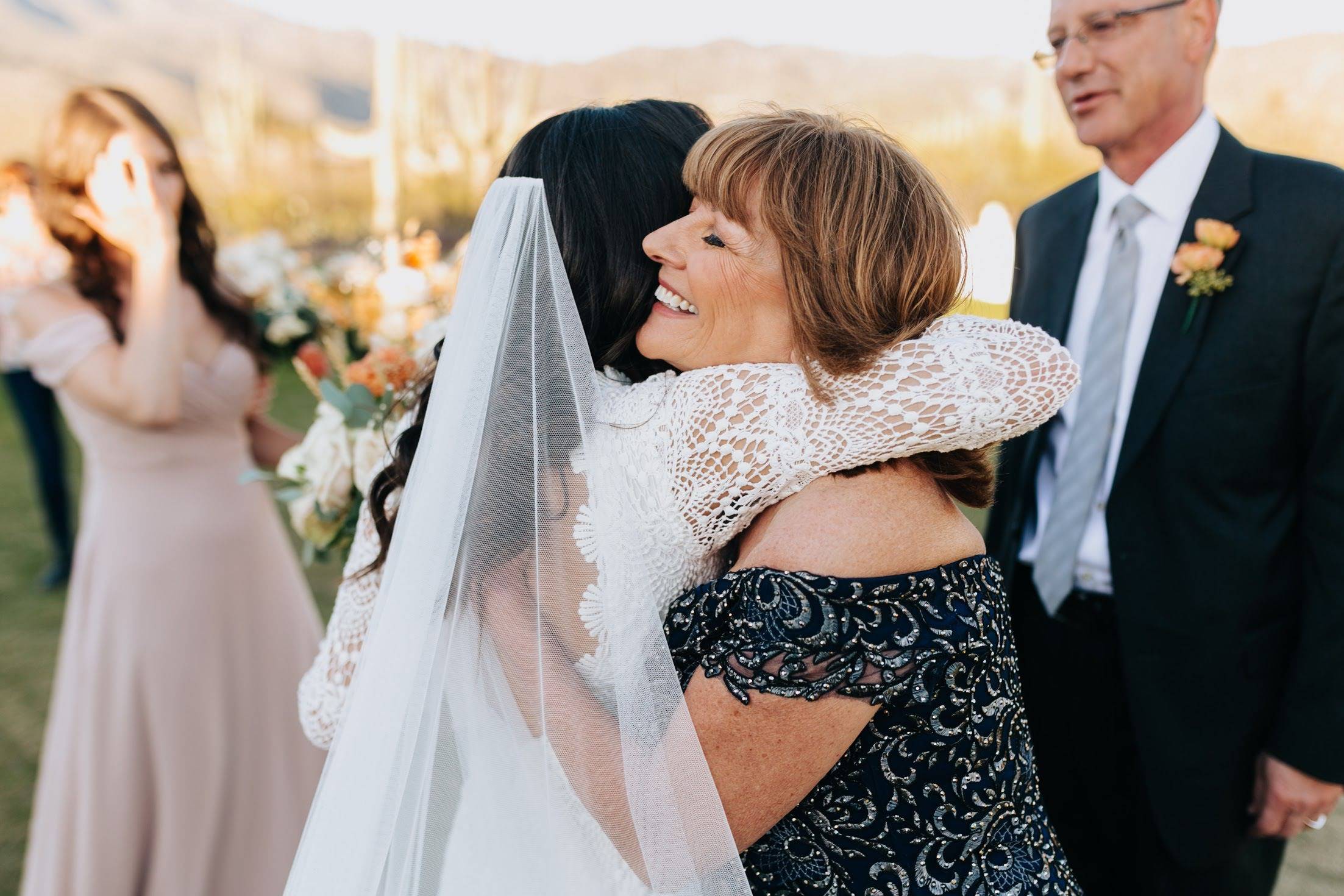 “Some of my girlfriends wore their bridesmaids dresses which was so sweet. We were so overcome with so many emotions. Feeling that love and support is something we will never forget - we are SO GRATEFUL for our community." 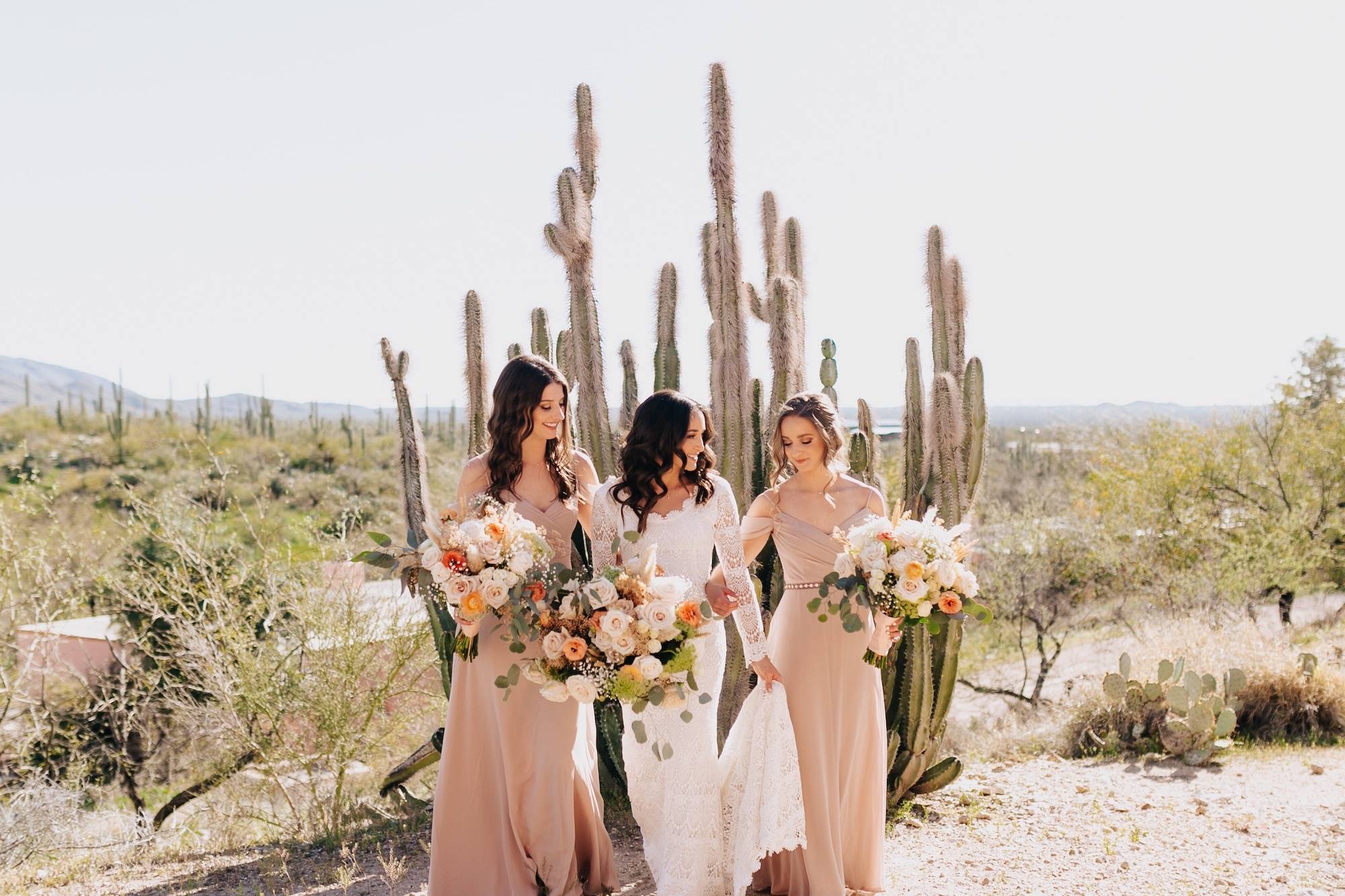 "It was beautiful, while also much different than we had imagined” 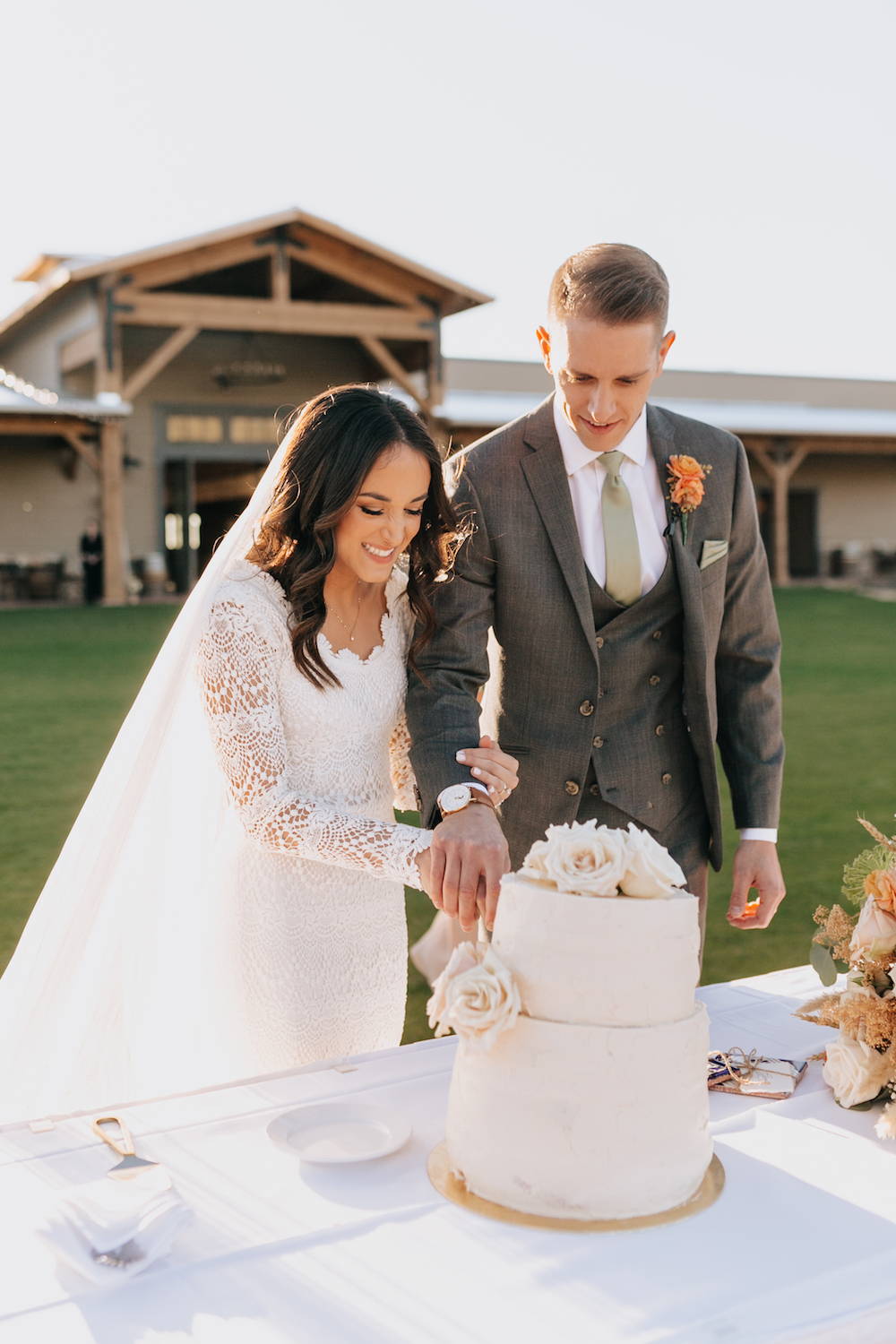 After the ceremony and pictures, they had an intimate dinner at Brittany’s parent’s home. Her mom prepared some incredible Mexican food and baked a lovely wedding cake. "Having our first dance at home, just in front of family was so sweet. I think we would have been much more stiff and nervous in front of all our guests." In the end, the key to making the most of it was, each other. 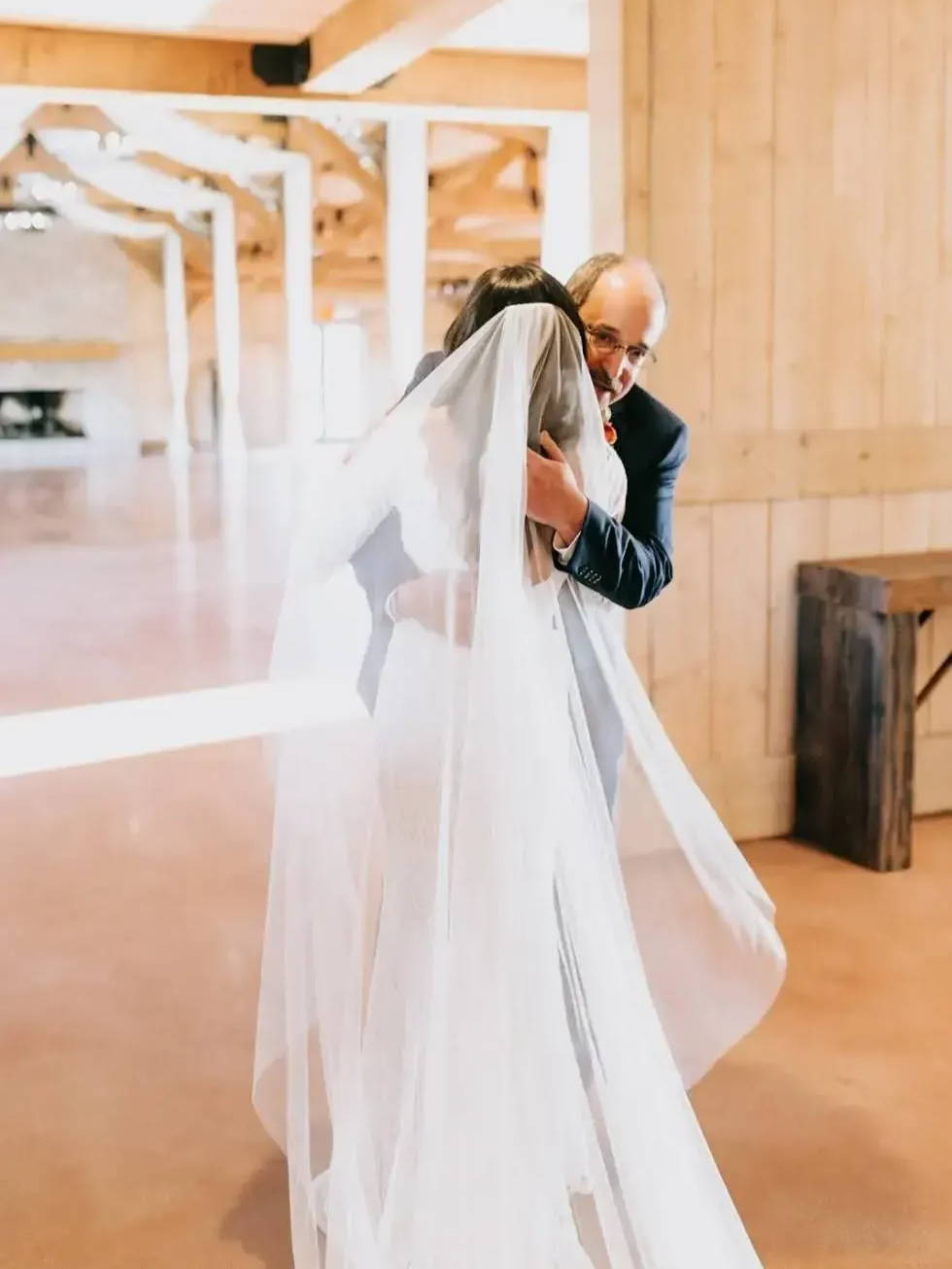 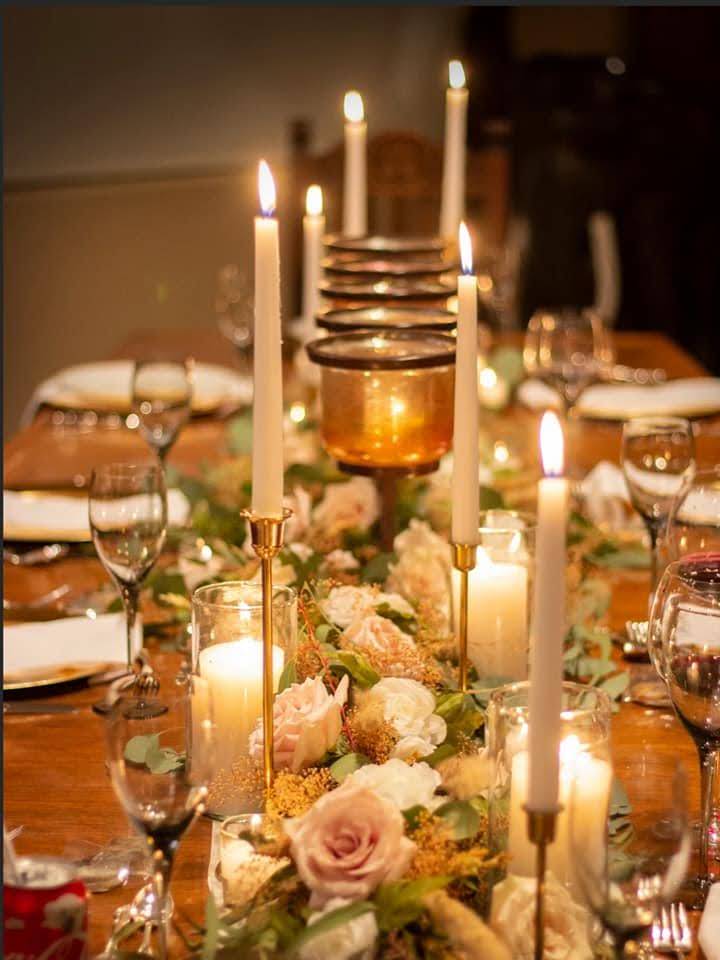 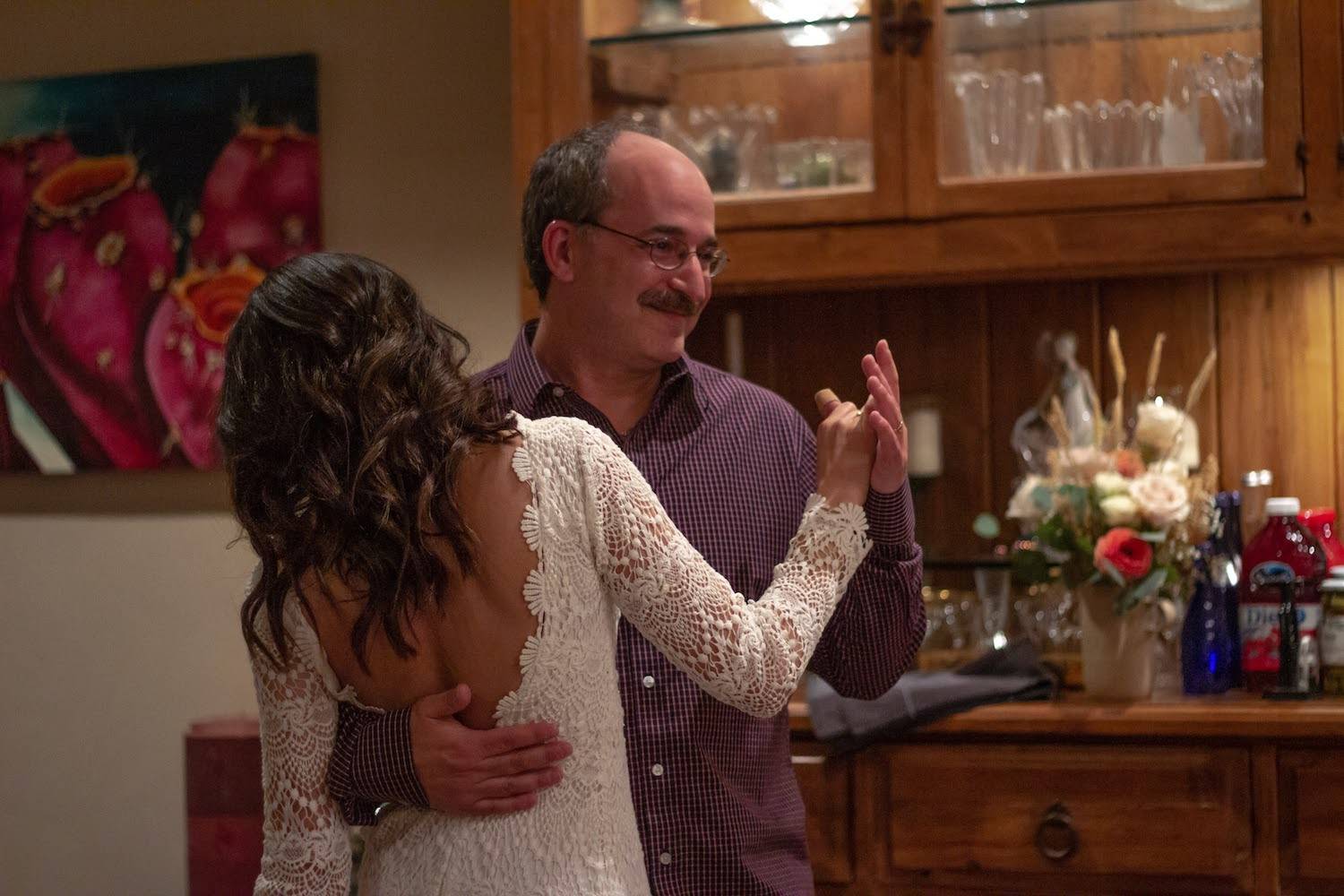 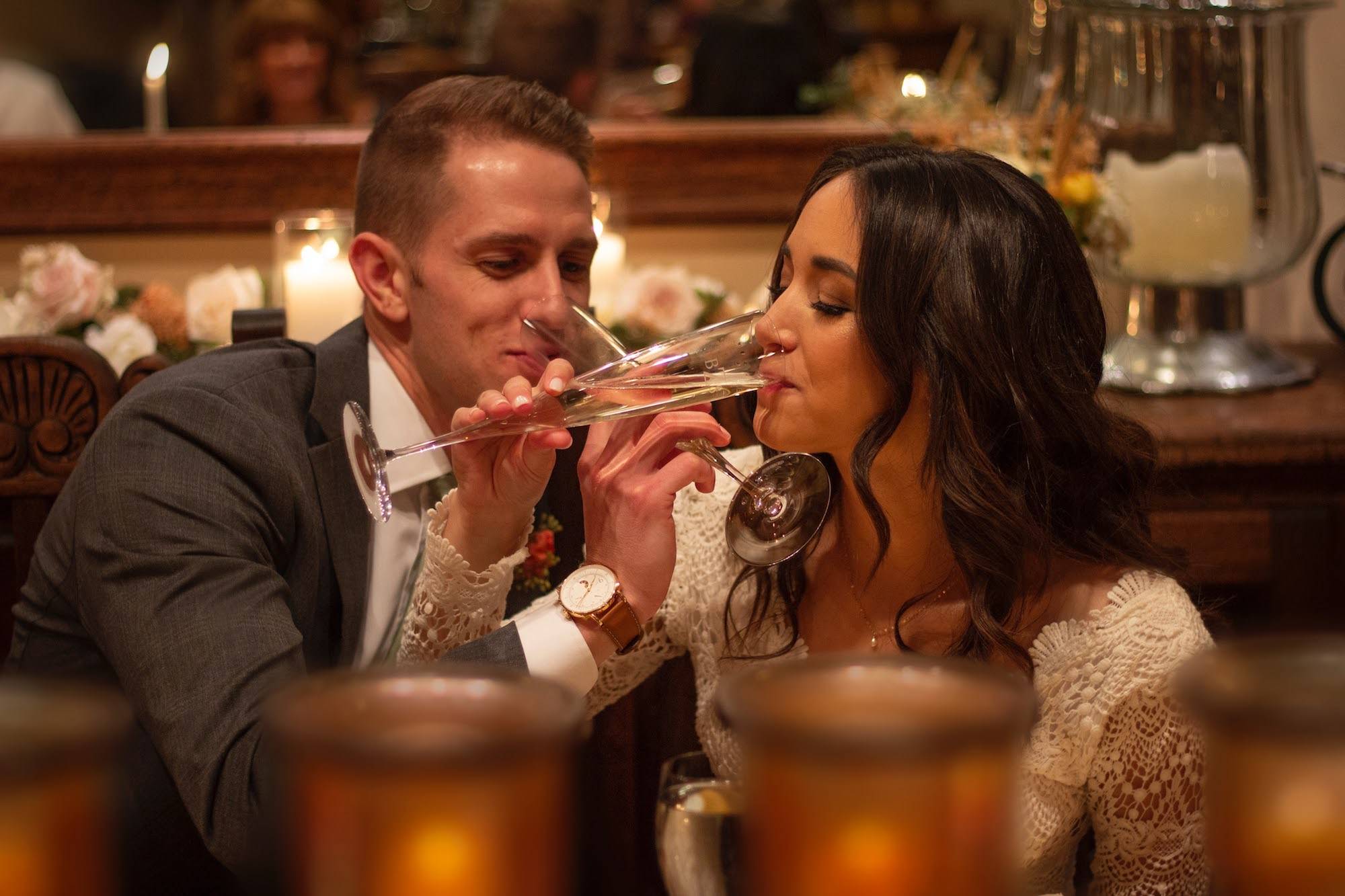 A friend tipped Brittany off to the Olivia Pump and she immediately knew they were the shoe for her. Complimenting her modern boho style dress, Brittany was looking for a shoe that could add a traditional and contemporary flare to her look. Simple, classy and so striking at the same time, she loved the gold ring up against the white silk.

Brittany also loved the five star customer service and the highly personal communication with Camilla Gabrieli. Getting to know the woman behind the brand was a thrill. "The shoes, of course, made the wedding so very special. I felt so beautiful in them.”

"The shoes, of course, made the wedding so very special. I felt so beautiful in them.” 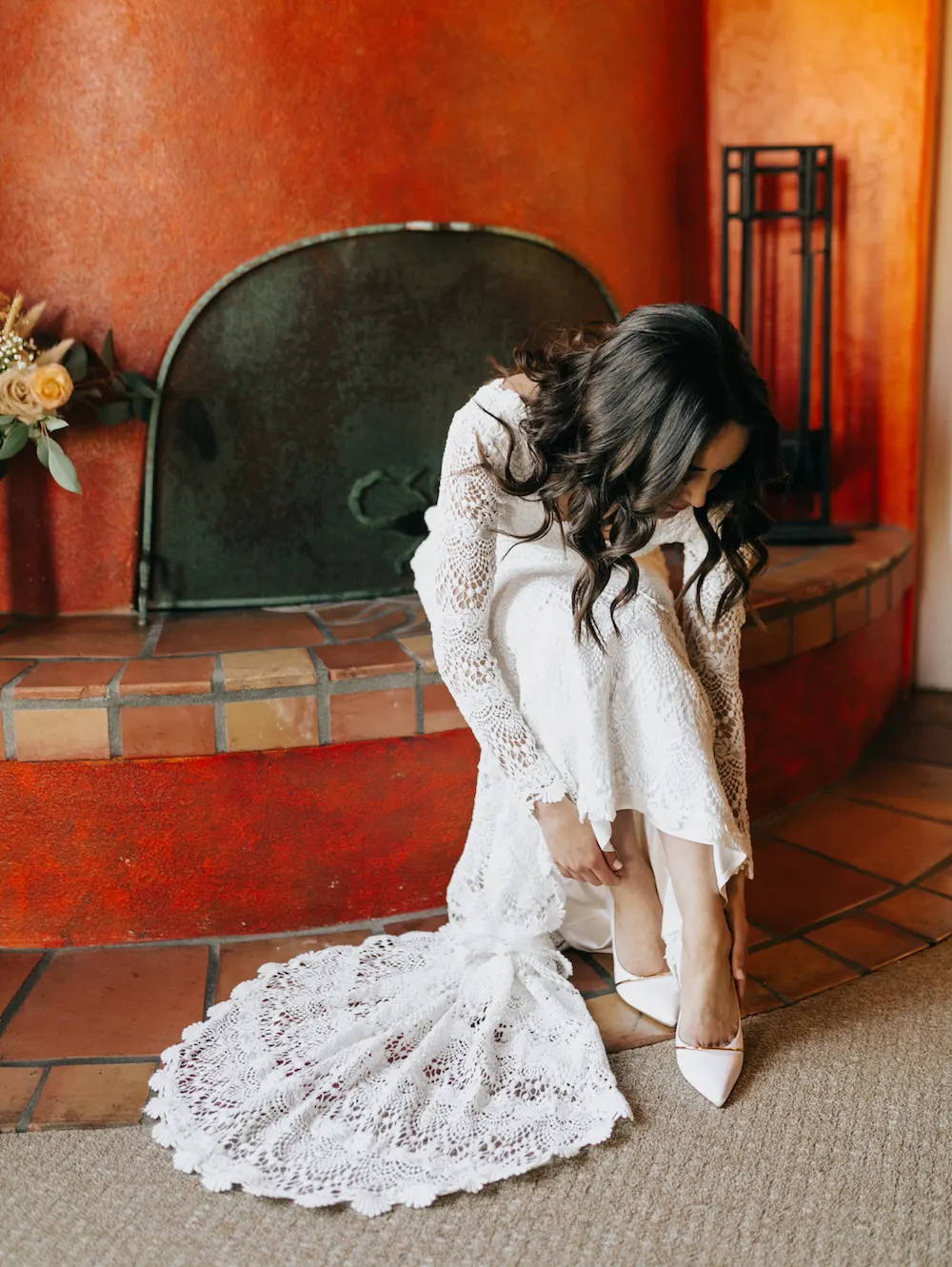 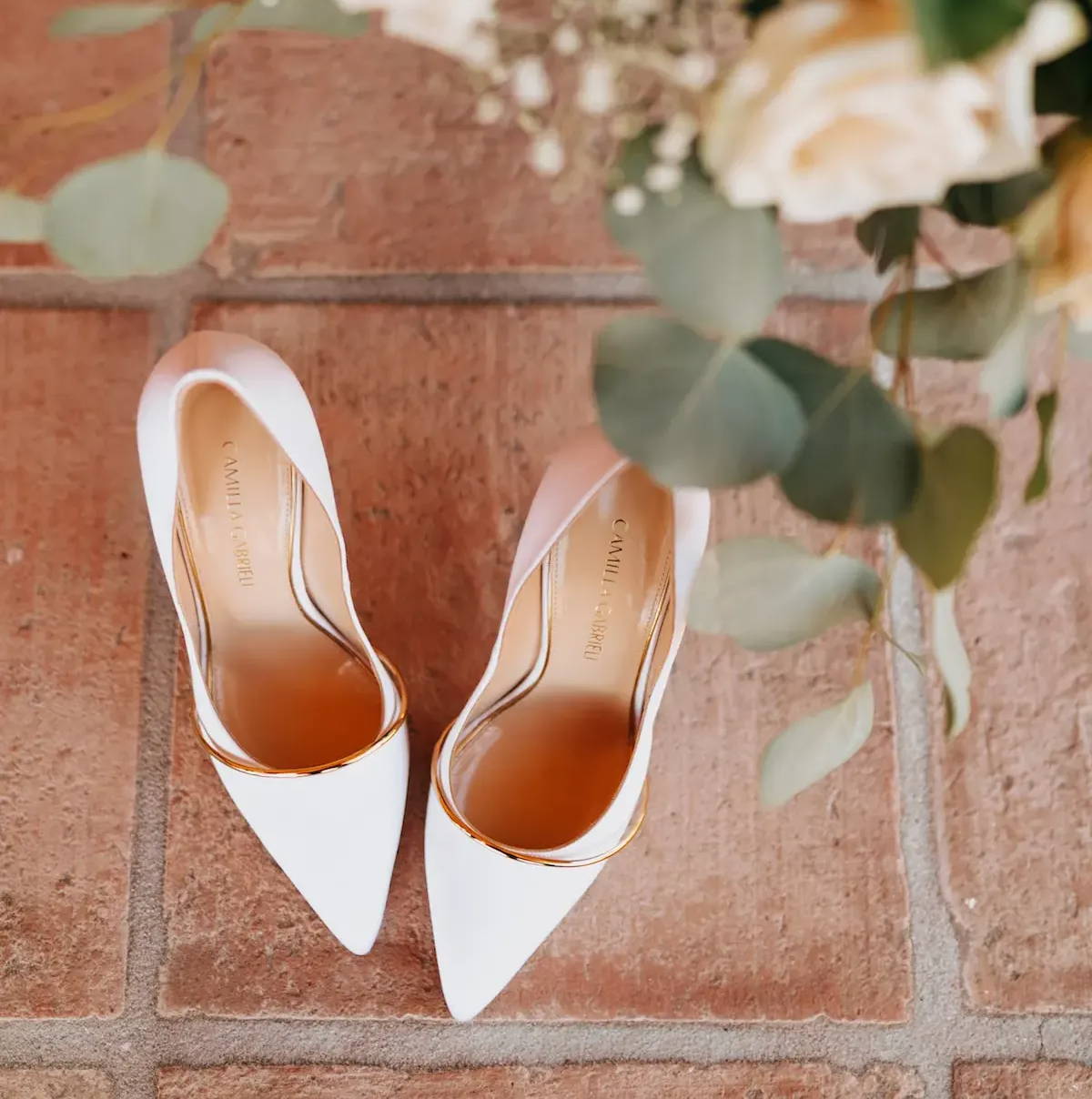 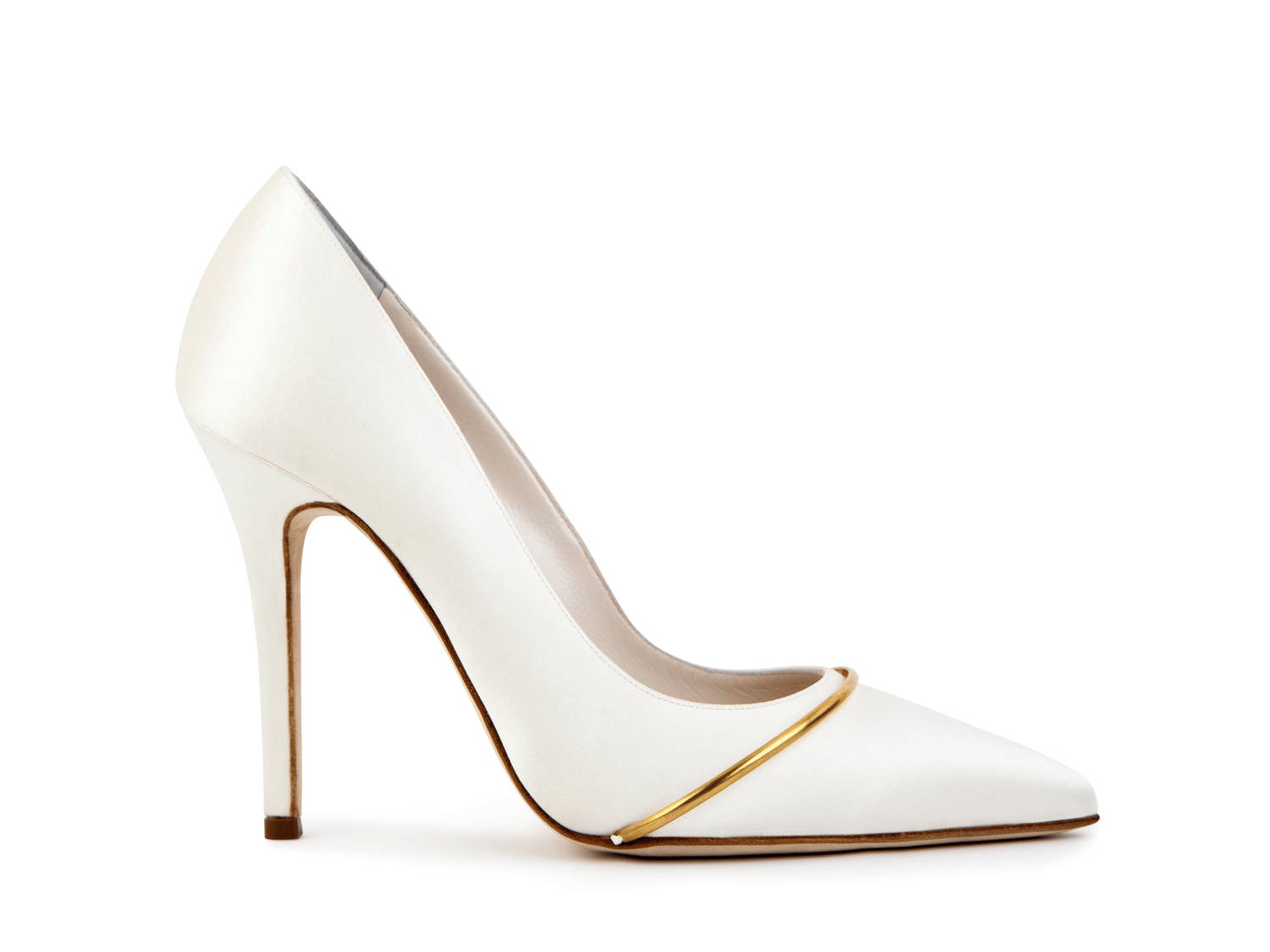 While she didn’t have a a complete image in her head of what she wanted, she knew it should be something sleek and simple. Brittany started her search for wedding dresses at a couple different boutiques and ended up buying a dress with a more romantic boho feel. A seamstress made slight alterations and Brittany was able to create a show stopping dress for her wedding day. 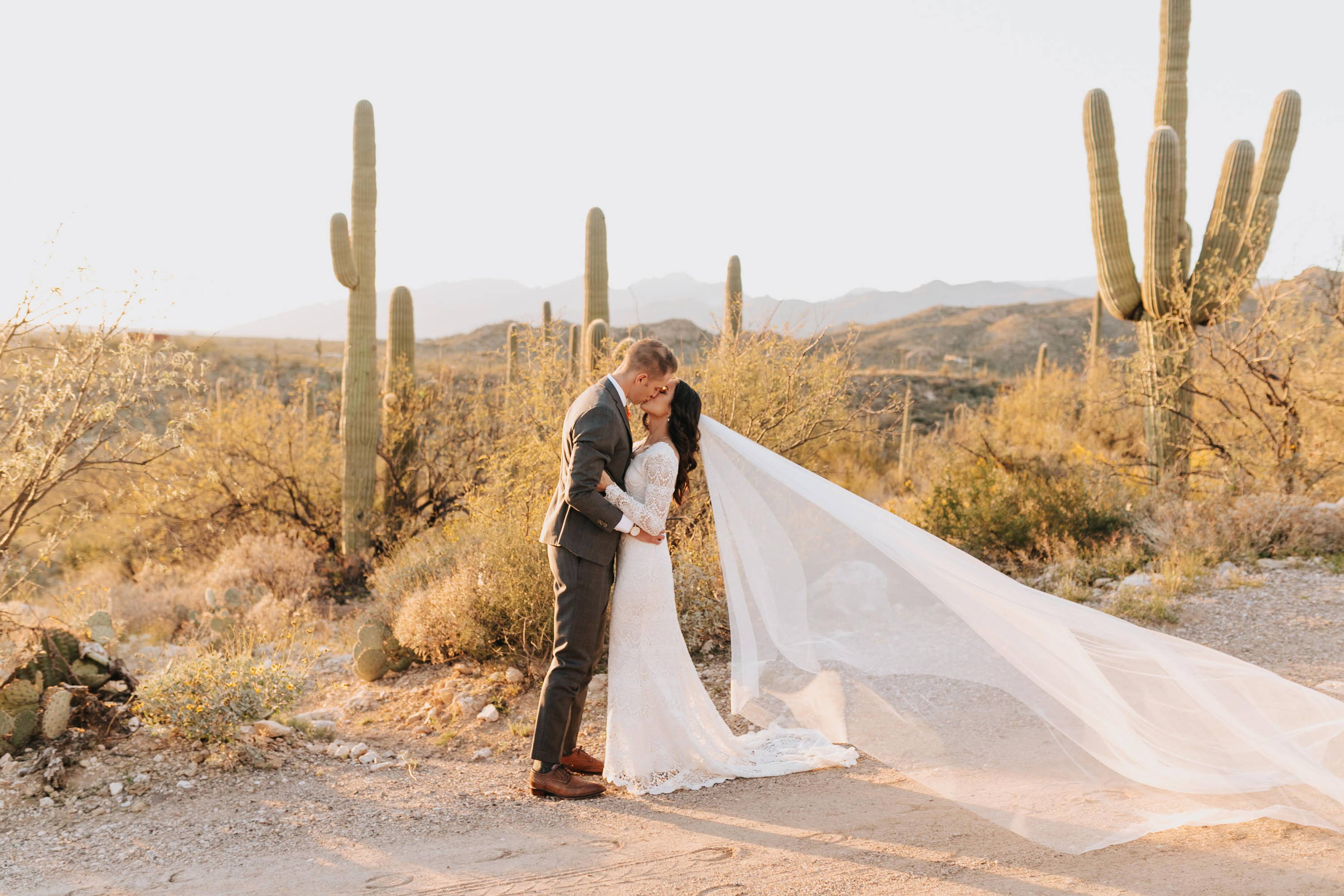 A flashback to their lovestory

Brittany was smitten about Steven from the moment they met during their Sophomore year of college. She had just gotten out of relationship and he was a bit shy so they didn’t pursue anything right away. Timing was in their favor when their paths crossed again over a cup of coffee five years later. By their second date, the following day, the two knew they were meant to be together.

With their two rescue dogs, brother and sister Belgian Malinois/Heeler mixes,  Brittany and Steven love exploring the beautiful mountains and lakes near Phoenix. Brittany describes her husband as, “hands down the most amazing human.” She fell in love with his hard work ethic and fearless ability to let the little kid in him shine through. Whether it’s a kitchen dance party or exploring the beauty of Italy, the couple loves spending time together.

Despite all of the challenges, they are thrilled to be married and going through this crisis, together. While still itching for time away, they know it's best to wait until it's safe to travel, especially since they live in a current hot spot for the virus. They’re keeping their fingers crossed for a trip to Italy and Spain next summer.

How did he propose?

On a beautiful sunrise hike near her family’s home, Steven schemed with Brittany’s sister to create a striking proposal. The two convinced Brittany to trade her workout clothes for a cute pair of jeans for their short walk to nearby cliffs with a beautiful daybreak view. Once they arrived, Steven, after some fidgeting that nearly gave it away,  got down on one knee and proposed.

The ring and setting was created by the parents of one of Brittany’s bridesmaids. “It's a round solitaire set on a thin gold pave band. I love the simplicity of it! It's stunning. I think my sister in law helped a little but he picked it out mostly on his own and had them custom make the band - he did great!” 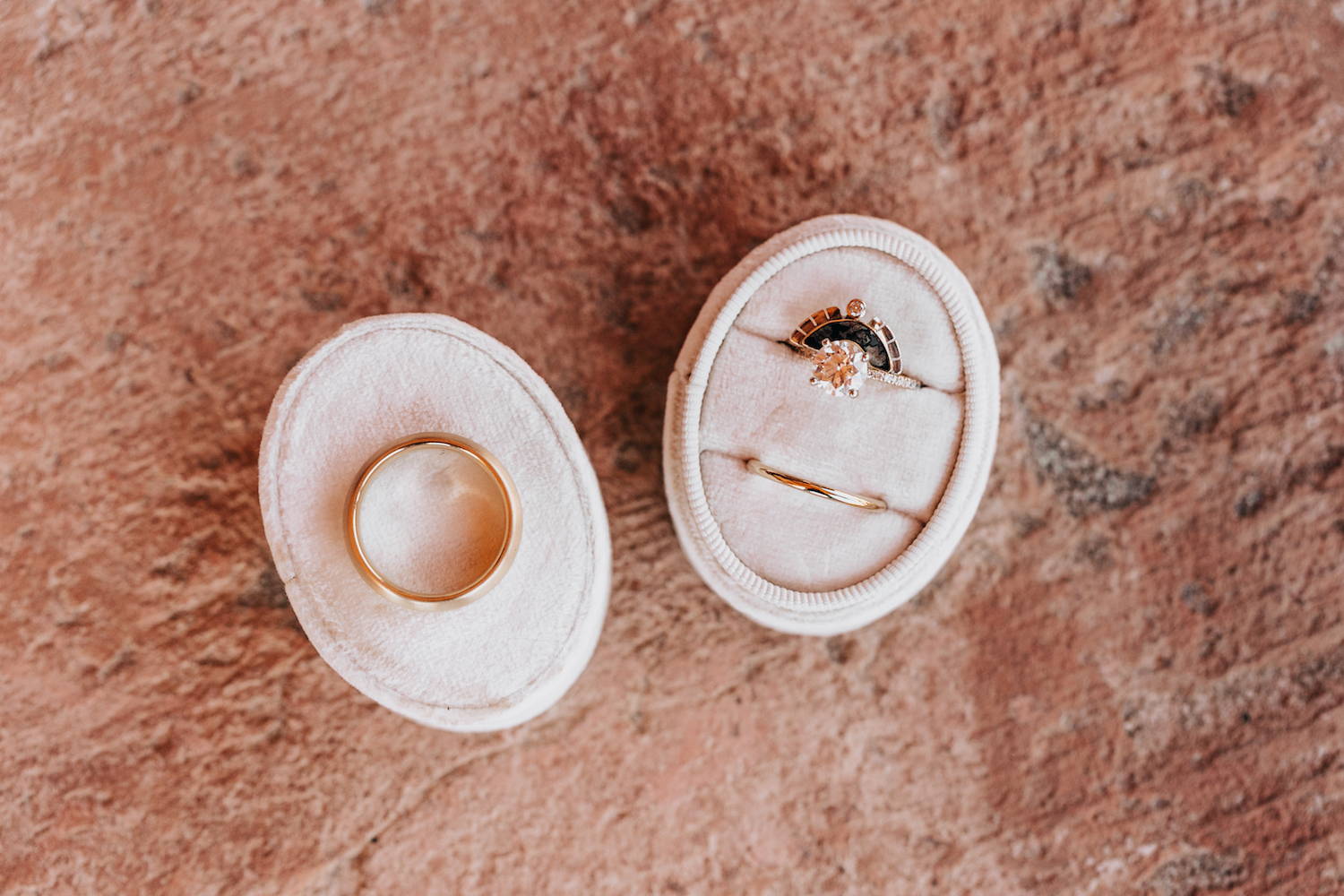 “When I tried on the Stella sandals the whole outfit came together. They elevated the pieces to another level. I really felt like a princess. They’re my favorite shoes I’ve ever worn by far (and I have a lot of shoes).” 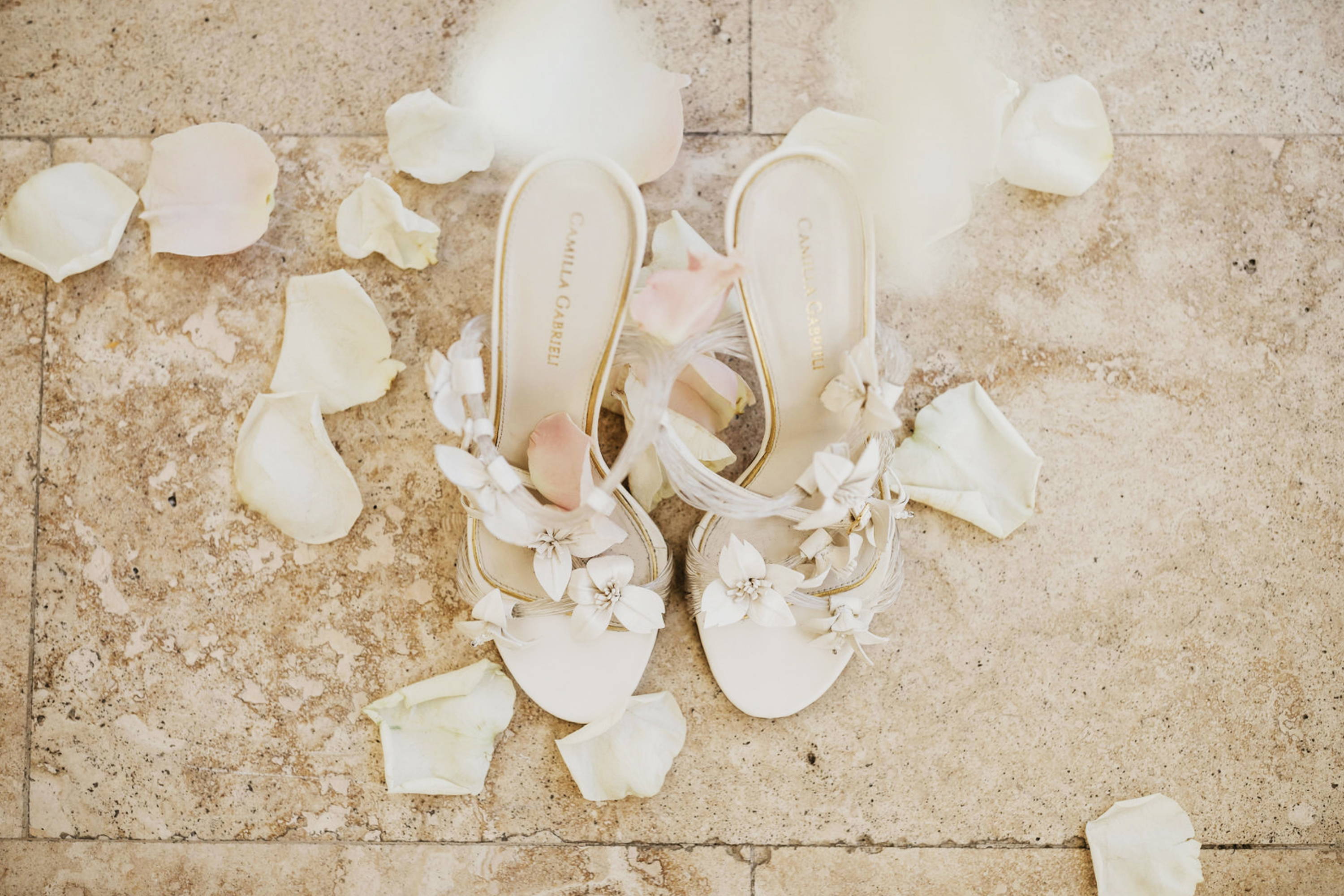 With the second celebration still up in the air, they are speaking with vendors often about their options and next steps. "I'm not even sure if I would wear my dress again or something white but a little more casual like a beautiful jumper or something. Of course paired with my Camilla Gabrieli heels!"

My advice for COVID brides.

"For those who will share a similar experiences, I encourage you to experience the whole range of emotions that the planning will bring. Feel however it is that you need to feel. It's an ambiguous loss and deserves the time and space to be processed. It's okay to feel so genuinely elated with your beautiful marriage one day and upset to not have had family and friends there with you to celebrate the next.

Honor what feels most organic for you and your partner. Every relationship is different.” Just be true to who you are as a couple- your morals, values and your passions. Make sure that your day reflects all of those things beautifully and remember that the day is about your commitment to one another. That's truly the most important piece." 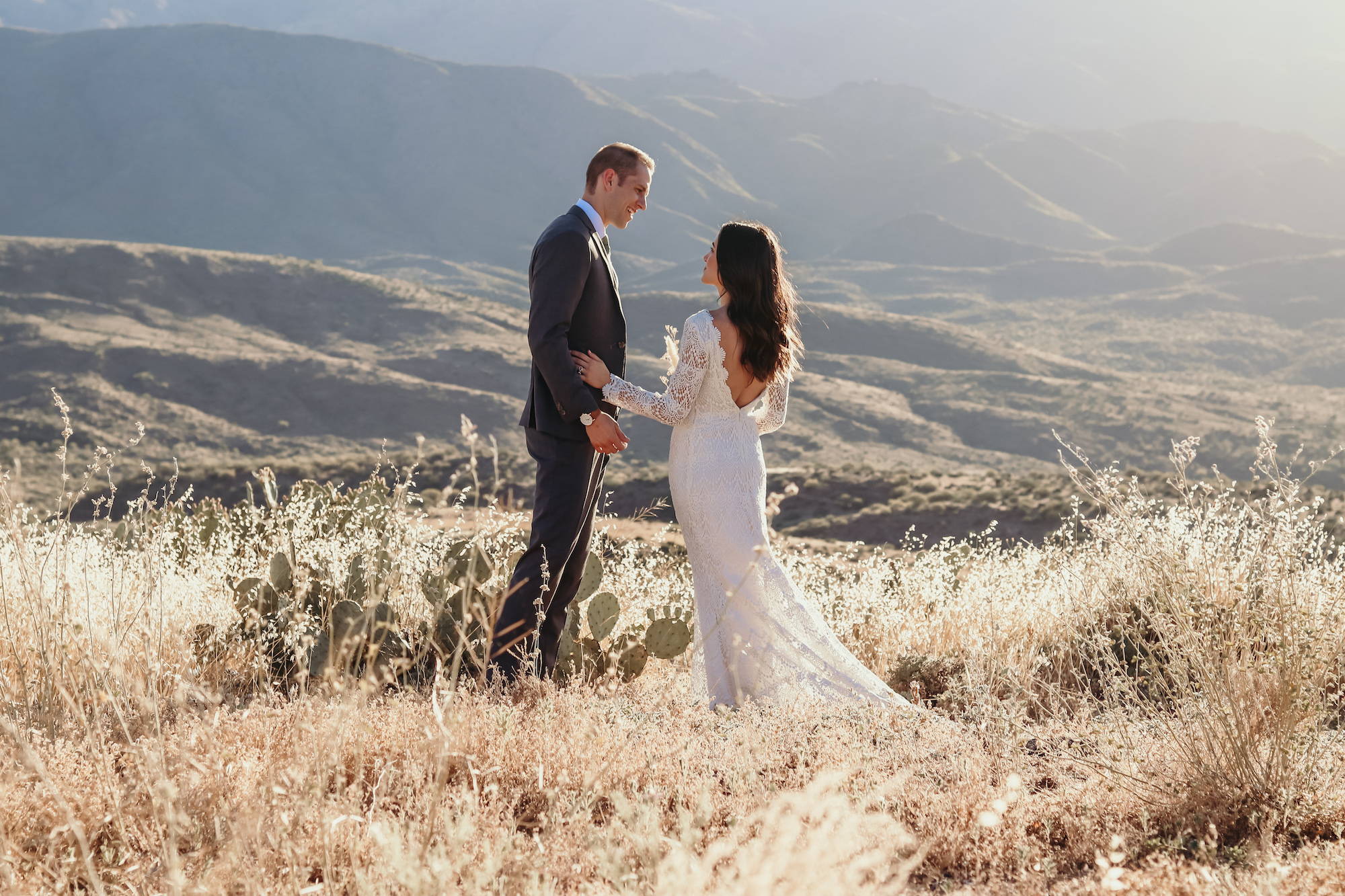